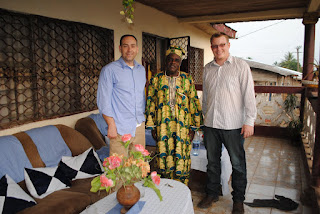 Today was a day filled with excitement and opportunity. We to the nearby city of Limbe to gather supplies and tools to build the rabbit and snail cages. While there we had the great opportunity to evangelize to 3 different people. One was the owner of the hardware “store” that we were at. She was a catholic and I began asking her if she had ever read 1 Tim 4:1-4 and she said she had not. She then got out her Bible and read it and her eyes got about the size of dinner plates. She exclaimed that she always thought it wasn’t right but now she new it wasn’t from the Bible. We have another Bible study set up with her and one of her workers. We also ran into a young man named Vincent that we have studied with several times and he attended services on Sunday here in Wotutu. We encouraged him to really consider his eternal destiny and he claimed he knew what to do but said he wanted to think about it some more. We finally pressed him into letting us study with him tomorrow at 10 am. I really believe we will convert this young man and the woman from the hardware store.

After lunch we began construction of our open range snail bed. It is coming along nicely. We should be finished with it tomorrow and I will post pics of the finished pen. We also should start on the rabbit pens tomorrow.

This evening we went for a stroll through the village and went and visited the village “Dr.” He was wonderful company and we enjoyed some nice bottled water on his porch while we talked. I found out in our conversation that he also owns a very large plantation and farm about 6km from our village. I explained to him what I am teaching here and he became very excited. He then insisted that I show him first hand at the school. One thing that I showed him was how to use a 1.5 liter water bottle turned upside down with a hole poked in the lid for a drip irrigation system. He became so elated seeing how well it was working with our vegetables here at the school. He said he wanted me to come to his farm to train all his workers and managers how to farm, irrigate, and fertilize better. I told him I couldn’t because of my obligation to the school right now. He then proceeded to tell me how was going to try to procure the land next to the school for us to use for our school farm. Maybe meeting him was “Just what the Dr. ordered….” The picture above is Brother Martin Johnson and the Dr. with myself.